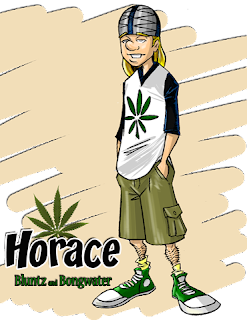 Not the brightest Horace quit school at 13 to pursue his dream of becoming a career Pothead/ Cartoonist. He hangs out in his Grandmas basement getting high and dreaming about becoming a famous cartoonist. Horace has a lot on his plate, but he is usually to high to finish any of it, so it’s mostly a lot of half finished or just started things.

Horace works part time at Re-fry’s Tattoo Shop as the shops apprentice, hoping one day to actually tattoo someone. In the meantime he cleans up the shop and answers phones. He drives an orange Volkswagen Bug.

Uses the name Himey cause he says Hector doesn’t sound "gangsta" enough. Himey works with Horace at the tattoo shop and is his Co-host on Late-night at the 420. He is Horace’s best friend they have know each other since grade school. He also rates albums and sells the" GREEN" for some extra dough.. Himey hopes to one day open up a head shop if he can just save enough cash. Himey does not drive. 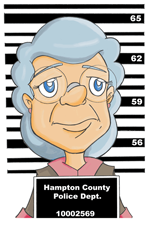 A looker in her day Grandma J was a former pin-up girl and hippie in the 60’s. She is now apart of her church choir and receives medical marijuana for her glaucoma. So basically, she gets the GOOD STUFF! She lives with her grandson Horace who helps her out with a lot of things. 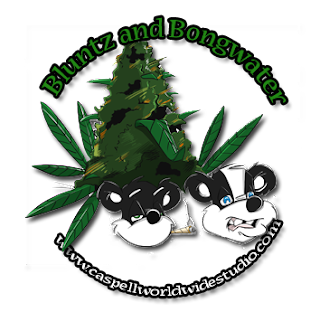 The Green Fund- Help me re-supply my supply.

Followers of Bluntz and Bongwater